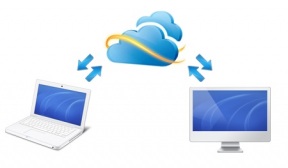 SkyDrive, Microsoft’s online storage service, is one of the core elements of the company’s cloud strategy. Today, Microsoft is taking the wraps off a number of new SkyDrive apps, including a Dropbox-like desktop integration for Windows and Mac (OS X Lion only). With this, SkyDrive will function like any other folder on your machine and any file you save to it will be automatically uploaded to the cloud and synced to your other computers. For current Dropbox users, this is obviously nothing new and it’s taken Microsoft quite a while to finally offer this feature. With this update, though, Microsoft is also reducing the amount of free storage it is offering new users from 25GB to just 7GB.

In addition to this Dropbox-like functionality, Microsoft is now also making it possible for Windows users to access, browse and stream files from a remote PC that is running the SkyDrive preview app. This feature, of course, only works while the remote PC is powered on.

Microsoft is also launching updates versions of its mobile apps for iOS and Windows Phone today. SkyDrive is now also available for the iPad.

Google, of course, has been rumored to launch its Google Drive service very soon, but for the time being, it’s not clear how closely Google’s service will resemble Dropbox and SkyDrive and how much free storage it will offer.

Sadly, though, Microsoft is also using this update to reduce the amount of free storage it offers to new users from 25GB to 7GB. Why this odd number? Microsoft says that just 0.06% of current SkyDrive users use more than 7GB. If you already have a SkyDrive account, you can get grandfathered into the old plan. Existing users who already use more than 4GB os storage space on SkyDrive will be automatically upgraded to 25GB for free, but if you currently use less, you will have to do so manually.

New users will be able to buy more storage, of course. Paid plans start at a relatively affordable $10/year for 20GB and go up to $50/year for 100GB. Microsoft calls this a “more flexible approach” and says that it wants to offer a gimmick-free service that strikes the right balance of being free for the vast majority of customers, and low-priced for those who want more.”

Getting Started with Pods framework in WordPress [Beginner Tutorial]