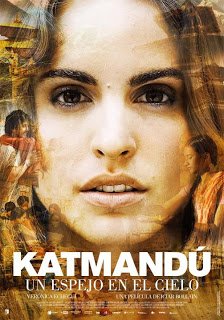 Katmandú, un espejo en el cielo is a Spanish movie shot in Nepal. In English, the title is Katmandu – a mirror in the sky. Movie is directed by Goya Spanish Academy Awards winner Iciar Bollain. She also wrote the story being inspired by a novel by Victòria Subirana. The movie stars Spanish actress Verónica Echegui, Nepali actress Saumyata Bhattarai and Nepali actor Norbu Tsering Gurung. The whole movie is shot in Nepal and able to capture different beautiful locations of the country. It took around three months to shoot the movie from April to June 2011. Total estimated budget was around €4,500,000 (NPR 50,40,00,000 approx). Movie released in 3 February 2012 in Spain.

Veronica Echegui won the ‘Best Performance by an Actress in a Leading Role’ title in Gaudi Award from this movie. Movie was also nominated for other categories like Best Cinematography, Best Screenplay, etc.
Movie is about a young Catalan teacher Laia who moves to Kathmandu in the early 90’s, to volunteer in a local school. She will soon discover extreme poverty and a devastatingly bleak educational system that leaves out the most needy. She initially protests and later decides to get married out of convenience, so as to legalize her situation and take on an ambitious educational project in the slums of Kathmandu. She immediately realizes that she can’t do it all by herself. She also discovers a beautiful gift she had never expected: to fall in love with the stranger she marries. She finds herself torn between her love life and her commitment to the children she helps. Laia and Sharmila, another young teacher who becomes her dearest friend, work side by side to launch a new project that will distance Laia from her partner beyond repair. It will, however, always unite her to Sharmila and small Kushila, in a personal journey into the depths of the Nepalese society and also to her most inner self. [Synopsis]

Movie has been released already in Spain. I hope it will also be screened in the theaters in Nepal. Trailers looks quite promising. I think this movie would be a nice slap to Nepali movie makers who do not/could not find Nepali stories for the movie and import it from other movie industries.