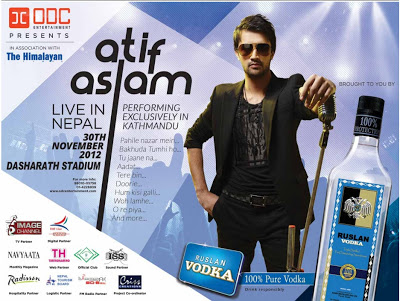 Good news for music lovers. Atif Aslam, Pakistani pop singer, is performing in LIVE concert in Kathmandu, Nepal. Program is scheduled for November 30, 2012 in Dashrath Stadium, Tripureshwor. ODCEntertainment is bringing Aslam to sing in Nepal in front of Nepalese music lovers. Ticket price is NRs. 1000 and NRs.1500 only.  Atif has earned good fame and position in Bollywood playback singing. In his Live concert he will be performing his famous songs like Tu Jaane na, Woh Lamhe, Pehle Nazar me, Doorie, Tere bin, O re piya and many more in two hours long program.

Who is Atif Aslam?

Atif Aslam was born in Pakistan as Mohammad Atif Aslam in 1983. He is a popular Pakistani pop singer and actor. Atif Aslam’s soulful voice crossed the Pakistani border and reached India when Bollywood director Mahesh Bhatt called Atif Aslam to seek his consent to put “Woh Lamhey” as a song in the soundrack of his new motion picture, Zeher. After that, Atif Aslam’s music spread across to people and radio stations that play it all over the subcontinent now. His three songs has been featured in Hollywood movie Man Push Cart. He was received by screaming fans and admirers that had fallen in love with the voice of a Pakistani boy.
Atif Aslam was the first Pakistani singer to be nominated for the most prestigious Indian “film fare” awards two years in a row. In a nutshell, Atif Aslam has clearly become “The biggest superstar of Pakistan” in less than 7 years. On stage, Atif Aslam is a Rock star, he is larger than life but he doesn’t bring back that part of his performance back with him off stage.
Home page of Atif Aslam : Atif Aslam
Twitter : itsaadee
—
Src : src1, src2, src3